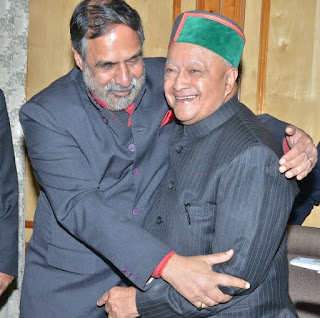 SHIMLA---Himachal Chief Minister Virbhadra Singh was present on the occasion of filing up of Nomination papers by Shri Anand Sharma for the Rajya Sabha seat here at Shimla today. "It was 32 years back, when Shri Anand Sharma was made President of Youth Congress by me", said the Chief Minister and he was happy to see him rise in his political career.

Talking to media persons on T-20 Cricket Match between Pakistan-India  at Dharamshala, the Chief Minster said that it was up to the Board of Cricket Control of India (BCCI) whether to hold the match in the State with Pakistan or not.  He said that the State had enough security forces to maintain law and order, but the fact was that the security forces would not resort to Lathi charge or tear gas shells on the agitating protestors or relatives of the martyrs and ex-servicemen. He said that the sentiments of the martyrs were to be respected at all costs.   Being questioned on the allegation by Secretary BCCI, Shri Anurag Thakur about the dilly-dallying tactics and unclear stand of the State government on the Match, the Chief Minister said that he was not answerable to Shri Anurag but to kin of the martyrs. The Chief Minister said that his stand on the match had been the same amidst the rising controversy and he always reiterated that force won't be used against the agitators.