Will talk to PM for early release of funds for Swan channelization: CM 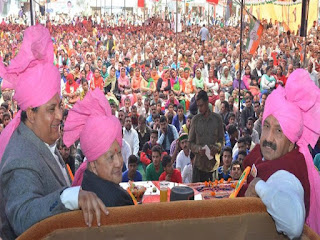 Will talk to PM for early release of funds for Swan channelization: CM

UNA-------Chief Minister Shri Virbhadra Singh today said that he would strongly take up the issue with the Prime Minister of India for release of remaining funds for Swan river channelization.  He said though provision of funds had been made in the Union budget for channelisation of Swan river and its tributaries, but due to some uncalled reasons, the funds had not been so far released to the State government.

Shri Virbhadra Singh was addressing a well attended gathering at Daulatpur-Chowk in Gagret assembly constituency of Una district today. He said the Congress government had initiated the process of channelisation of Swan River and its tributaries on priority as it was causing destruction of land at a large scale.

The Chief Minister said that it was the State BJP leaders who were playing politics in the name of Swan channelisation and exhorted the people of the area to raise voice for their right. He asked the Member of Parliament Shri Anurag Thakur that why the funds sanctioned for the Swan channelisation were not being released.

He said Una district was turning to be an industrial hub where industries were operational which had not only provided employment to the people but the district had also made its name in terms of development.

He directed to fill up the vacant posts of M.D. medicines and Gynaecologist in Community Health Centre (CHC), Gagret and to start science classes in GSSS, Bhadrakali. He announced construction of stadium in Ambota at the earliest and adequate funds for GSSS, Gondpur-Banehra besides construction of building of Tehsil office at Ghanari.

He also assured for construction of bridges at Andaura and Loharli.

Satsang Babehar road to cost Rs. 1.54 crore which would benefit a population of around 3184 of Rajpur and Babehar.

He also honoured the prominent citizens of the area for their contributions in development and for bringing laurels to the constituency.

Industries Minister Shri Mukesh Agnihotri said the BJP leaders were visionless and they were trying their best to halt the development in the state. He said that the first installment of Rs. 107.80 crore was released by GoI in 2014-15 and thereafter the second installment of Rs.108 crore was pending with Union Ministry of Water Resources. The case for release of first installment for the year 2015-16 had also been submitted to Central Water Commission and was still awaited. He said that the State government had given Rs. 200 crore for the Swan channelisation and the rest of the funds were withheld by the Union government. The State government had committed to give Rs. 300 crore out of which the Chief Minister had already released Rs. 200 crore.

He urged the Chief Minister to take over the services of 11 teachers of  DAV college, Daulatpur-Chowk,  which had already been taken over by the government.

MLA, Gagret and Secretary AICC Shri Rakesh Kalia listed the developments of the area and urged the Chief Minister to get released Rs. 922 crore for Swan channelisation. He criticized Shri Anurag Thakur for playing politics by not letting the funds being released for the channelisation of River Swan and its 73 tributaries.